Superclasico — the soccer match between the two most storied teams in Buenos Aires.  It’s listed as one of the 50 sporting things you must do before you die.  It happens only twice a year and we were fortunate enough to be in Buenos Aires at the right time. 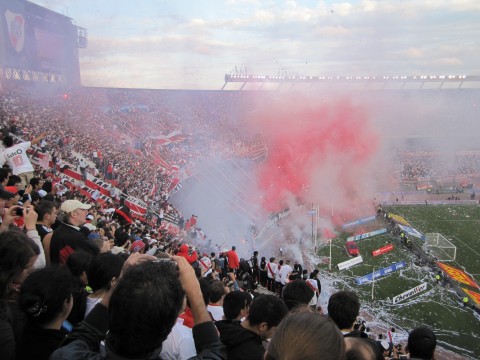 I don’t think anyone in the US can quite understand the atmosphere this game generates.  In the US, crazy fans might yell and scream, maybe take off their shirts.  In South American futbol, fans bring giant drums, bed-sheet sized flags, and flares, and the entire stadium chants their team’s songs in unison.  That´s all expected for a typical game.

But for Superclasico, everything is raised a level.  Riverplate and Boca fans don’t like each other much, which is probably why the police bring swarms of men in riot-gear and even a few tanks (yes, armored tanks, for a soccer game, with large guns).  Thinking back, the inside of the stadium does somewhat resemble a battlefield.  In the US, an occasional fan might throw a roll of toilet paper onto the field.  At superclasico, they light the roll on fire first.  People also light flares, firecrackers, and even fireworks from the stands.  There’s so much smoke at times that the field isn’t even visible.  The Boca section (visitors) in the upper deck is enclosed with barbed wire fences, and the sections on either side are kept empty as buffers.  But that doesn’t stop Boca fans from throwing lit flares over the fence onto the Riverplate fans in the lower deck.  We see a few small fires start this way.  The stadium and field become completely littered with paper (magazine catalogs and newspapers are supplied for free to all). Note that everything I’ve described happens before the game even starts.

Knowing ahead of time that the stadium would be rowdy and potentially dangerous, we reserved tickets from a local hostel where we’d be safe inside a large tour group and led by a guide.  Fortunately for us, the guide even spoke English.  Unfortunately he didn’t know Spanish though.  Nor was he familiar with soccer matches, Argentina, or leading a tour group (turns out he was the hostel bartender from Australia).  In fact, it seemed that the guide did his best to keep us as un-safe as possible.  On the way to the game in the tourist bus, there were other buses and cars filled with Boca fans in their blue and yellow jerseys, hanging out the doors and windows, taunting, singing, etc.  ﻿ Boca fans have a reputation for being hostile, which is why the bus driver was a little concerned that several of us were wearing red and white Riverplate jerseys.  He said something to our guide asking that the people take off and HIDE their jerseys.   Our guide did his best to understand the bus driver’s spanish, then relayed the message to everyone on the bus: “Those of you wearing Riverplate jerseys… Take them off… And WAVE THEM AROUND out the windows.”  We all thought this sounded like a bad idea, but after our guide repeated the order two more times, a few people in the back indeed started waving their red and white jerseys out the windows amid cars full of blue and yellow, thus setting our bus driver into panic mode.  After only a few seconds of frenzy our guide was corrected, the jerseys were quickly hidden, and our bus made it out with no bullet holes.

This giant flag is rolled out over the crowd and stretches over the upper and lower decks.

Other bonuses included in our tour group package:

– Bus driver thinks he will be funny by honking the mammoth bus horn to the beat of soccer chants over all the cars honking their punier horns.  This is indeed kind of fun until the bus horn gets stuck on, and everyone within a quartermile radius is treated to six minutes of pure bus horn bliss.

– The bus stops and tour guide tells us we’re getting out for five minutes to take pictures.  This patch of flattened grass and surrounding gravel doesn’t seem like the most picturesque setting, but we deboard anyway, after which the bus immediately drives away, along with the jackets some individuals had left on board.

– Tour guide gets lost trying to lead us into the stadium.  Tour group disbands since we’re probably safer off without the guide anyway.

You are currently reading Superclasico futbol match at 82 Liters.