The quest started in San Martín de los Andes, Argentina. We were in the northernmost part of Argentine Patagonia, in the lakes district. Joe decided he wanted to fish. Ideally, we hoped to find a local fisherman to take us out on his boat for a few hours and loan his equipment, for which we would pay, of course. 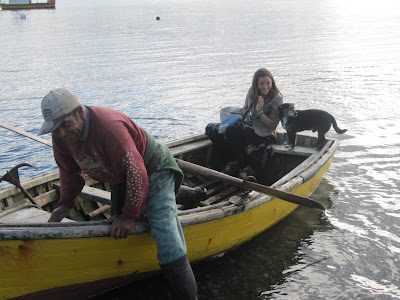 Kasey, our fisherman, and his trusty canine assistant

Unfortunately, beef really does reign supreme in Argentina. Seafood is almost nonexistent and pretty expensive when found on the menu. Fishing for sport is reserved for the serious (and wealthy), and thus any fishing excursions we found were in the range of $400/day per person. We tried figuring out how to rent our own equipment and walk to a stream, but even that required the purchase of a relatively expensive permit. Equipment was rarely for rent, and where in our 82 Liters would we have room to carry around a pole?

The desire to fish continued through Argentina to Bariloche, El Bolsón, and even across the border into Chile. Finally… a country where the fishing industry had a seat at the table. And upon reaching the tiny island of Meulín, we successfully located our perfect local fisherman.

Back up a second — even that makes it sound too easy. Getting to Meulín itself was an adventure. After leaving mainland Chile for the big island of Chiloé, our hotel owner assured us we could stay the night on one of the smaller and more remote islands simply by hanging around the port, “befriending a fisherman”, and getting invited back to his or her island for a homestay. We took a local bus from Castro on the big isle of Chiloé to Achao on the smaller isle of Quinchao. From there we set out to make friends and get the coveted invitation to some unknown, nameless smaller island. 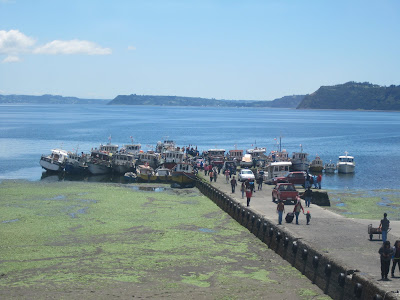 Making friends with the boatmen wasn’t as easy as it sounds (although since when are men working at the port in any country the “friendly” type?). I tried conversing in Spanish to the best of my ability, but with the heavy accents and slang being thrown around, I only got a few questions in before they would hurry off to load more goods onto their boats.  The “befriending” approach wasn’t working too well.  Randomly, after complimenting a 70 year-old woman on her shiny purple bike, she took an interest in our predicament and started marching up to every boat to ask if they had lodging on their island and the price to transport us.  Enough with the friend-making business, she was just plain direct. There were plenty of boats going to a half-dozen different islands, but the problem was that most boats wouldn’t return until 3-7 days later and thus we’d be stranded on a tiny, remote island for longer than desired.  After a good hour we eventually found the “Paulina” whose captain promised that a different boat would be returning the following day, and shortly thereafter we were bound for the small island of Meulín. 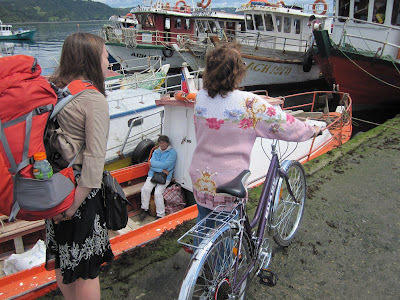 Upon arriving and settling into our Meulín boardinghouse, we finally got to ask our hosts the question: do you know a fisherman? The man of the house took us around to his neighbors until we found the perfect fisherman – Don Pedro. Joe and I crammed into his rowboat along with his fishing dog, Señor Gustavo.

With the simple gear of fishing line, spool, hooks, and bait we had a more than successful outing. Er….I had a successful outing. We had been pursuing Joe’s desired activity for so long that I had not even considered that I would fish. Since Don Pedro had two spools, we both decided to fish. I was surprised to be the first to catch one fish. And then a second. Meanwhile, Joe repeatedly wound and unwound his spool to check that the bait was still there.  My third and fourth came simultaneously, when I pulled up my line and there were fish on both hooks. For good measure I caught a fifth as Joe checked his bait a few more times.  On our way in Joe said he was happy that at least one of us got to catch fish and that therefore it was still a satisfying outing. 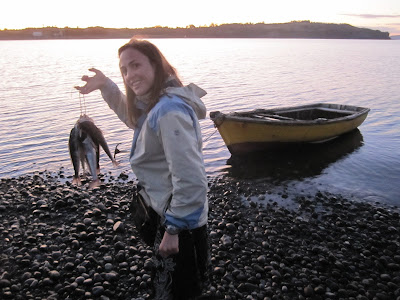 Over a dinner of lamb’s head soup and fried fish we enjoyed conversation with our hosts, including such cultural exchanges as “the United States…is that close to Australia?”. We were off the beaten path yet again, and this time was more successful than the last. The next morning we awoke in a rush, boarded the Tuesday boat (the “San Francisco”), and were back on the main island, fishing mission accomplished.

See the pictures in the slideshow below, or view the full album here.