Prague: where the streets are safer than the hostel

We were in Prague for three nights. We slept for only one of them. The other two were spent on the street and at the police station.

Apparently the Saturday night before Easter Sunday is a popular time to be in Prague. We called twenty hostels and hotels and not a single one had beds available. Our “show-up-and-find-a-hostel” plan that worked so well all through South America had finally bitten us.

But not to fear, Prague is a city with endless nightlife, especially on its busiest Saturday night of the year. We booked a hostel for the following day, dropped our backpacks off there, and stayed out all night! We were assured it would be completely safe, and it was. Our bodies held up surprisingly well through the night, with the toughest part being the three hour walking tour the next day under the hot sun on no sleep. 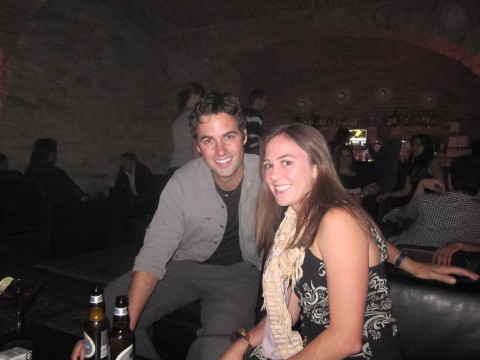 Let's see... only about 5 hours left until morning

Nothing notable about this night, except that is was the only one we actually slept.

After returning from dinner around midnight, we noticed police officers in the room next door and overheard the guests say something about stolen money. ‘Geez, we’re lucky it wasn’t us,’ we thought. Except that it was. Our room and lockers had been broken into. Kasey stormed next door to alert the police who told us not to touch anything until after the forensic expert arrived to take fingerprints.

The forensic expert with all his tools

Amazingly the only things stolen were our netbook computer ($300) and $60 cash. We were fortunately carrying our camera, iPhone, my new Kindle, and most of our cash with us to dinner. The thieves graciously left behind our passports, didn’t find our hidden credit cards, and probably didn’t realize that Kasey’s Kindle disguised in its sporty case was valuable. The girls next door were not so lucky — they lost roughly $1,800 in cash. They were trying to avoid ATM fees by carrying enough money for their whole vacation, which is not an advisable strategy.

Ironically, after staying in many shady cheap places through South America, this hostel was the most expensive ($35 per person) and most secure of our entire trip. The thieves had to pass the 24 hour reception desk, use an electronic key card to access the elevator, use a key card again to open our room, and finally break open the lockers.

Plus it was equipped with video surveillance cameras. We later watched the footage, which showed two normal-looking guys in their mid-twenties walking up and down the hallway until one of them stands at our door with his hands near the knob. We think he was using some sort of device to fool the key card reader. He enters our room while the other guy watches the hallway. Then the first guy exits and the second guy goes in — maybe he had more expertise in opening lockers. They’re about to switch places again, but suddenly they both jump away from our door as an innocent guest comes into view walking to her room. When the coast is clear the first guy enters our room again and shortly thereafter leaves carrying his backpack. The entire process takes less than three minutes. They were clearly professionals, as evidenced by whatever technology they used to replicate the key cards and by their entry into the lockers — one of our locks was cut off and our other lock was in place but the locker’s hinges had been unscrewed. 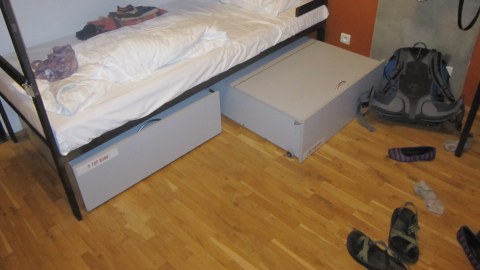 They scoured both lockers, but didn't bother to look in my nearby backpack which contained cash and credit cards.

Anyway, we spent the hours from 2 to 5 am at the police station (already tired from not sleeping two nights before) helping file the official police report, and then returned home for 90 minutes of sleep before catching our train to Poland. The police experience was actually kind of cool. We got to observe the fingerprint guy dusting our room with black powder, ride in a police car to the station, and experience CSI style questions first-hand.

In the end, the losses were negligible. The full cost of the computer was reimbursed by our travel insurance and the hostel didn’t charge us for our stay. All our photos were backed up online. So the only real costs to us were some annoyance, some lost sleep, and not having a computer for awhile (until our friends brought us a replacement). However Prague still probably won’t be making it onto our favorite cities list!

Aside from getting robbed, we did also see Prague’s famous sites. You can check out the photo album here.

§ 2 Responses to Prague: where the streets are safer than the hostel

You are currently reading Prague: where the streets are safer than the hostel at 82 Liters.