Joe and I heard about the 10-day Vipassana meditation course while we were working on the farm in Ecuador from one of the other volunteers. We were told they had sessions all over the world and they were completely free. Intrigued, we did some research into the organization and checked the worldwide schedule. When else in our lives would we have the “opportunity” to sit for such a long period? The $0 fee for food, lodging, and instruction and the idea of staying in one place for awhile were attractive propositions as well. The dates for the Serbia course coincided with our travel, so we headed off with visions of cults and drinking the kool-aid in our heads.

I’m sorry, are you crazy?

The course aims to teach the participants a meditation for observing the mind/body to gain insight and ultimately happiness. I was more curious about the proposed benefits of relaxation and overall self-improvement. Even though we aren’t currently in stressful jobs (though travel is its own kind of job at times!), we have a lot of time to think and believed this would be an interesting takeoff on that. Finally, we’re traveling partially to expand our comfort zones with new experiences and 10 days of silent meditation fit the bill.

One huge component of the retreat is the environment itself – you agree to lead a “moral life” (abstain from killing, stealing, lying, sexual misconduct, intoxication from drugs/alcohol), and to be free from distractions: NO talking, books, phones, or even writing. There is no eating after 12 noon (though you get fruit and tea in the evening). It’s donation-based, so you do not pay upfront for anything. Because others are serving you, you have over 100 hours to yourself for meditation. In reality, it’s more, since it is basically non-stop from 4am to 9pm and during free time you do little else besides eat, do laundry, walk, sleep….or think.

Our course took place at a church center (Catholic or Protestant, not sure), in northern Serbia. The facilities consisted of a dining hall, a “meditation hall” with cushions for each of us, and gender separated dorms. My room had 2 sets of bunk beds, and Joe’s had 3 single beds. There was also a garden area divided into separate walking spaces for men and women. We were right in the middle of several sunflower farms, and there were also a few ponds on the property. 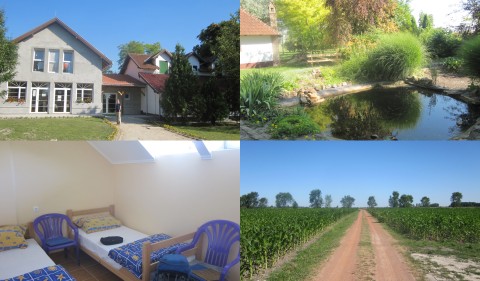 I also wasn’t completely silent. There was designated time in the afternoon and evenings to ask the assistant teachers questions, which I took advantage of several times, and was generally pleased at the response.

As for logistics, I kind of expected them to make some announcements – maybe at meals or in the evenings…at least to remind some of the ladies that we weren’t supposed to flush toilet paper!! But, there was nothing spoken, and the few instructions we were given came in the form of signs (“Label cup with name”, “Laxative tea – take only half a cup”). I also had a crisis for which I had to break the silence – my shampoo was disgusting. For some reason it got caked in my hair and came out looking like lint clumps in my brush. On Day 7 I finally asked the manager to borrow some shampoo!

After 2 full days of meditation, Joe decided the course was not for him. He thought it was moving too slowly, disliked the chanting (more on that later), and thought the teacher was using pseudoscience to make his points. Luckily, we had discussed this potential situation and had a plan on how to meet up and communicate after the course. I had hoped not to notice, but the genders were only separated by an aisle in the meditation room, so I immediately saw when he didn’t show up on Day 3. My mind was totally consumed with this news at first, but surprisingly, I was able to move on after an hour. That is, until about Day 6 when I laid awake at night thinking of extreme situations (could he be really sick?) and almost used my Kindle to check email. I finally convinced myself that this was a good opportunity to practice balance in responding to whatever might have happened. Though I do not encourage attending with the idea of leaving (you are taking someone else’s spot, taking advantage of others’ generosity, etc), his ability to leave was further proof that this is not a cult, and he appreciated his short time there.

I inevitably created some mental games to occupy myself, such as breaking the habit patterns of others. I noticed most people sat in a particular seat at each mealtime, so I purposely sat in those seats to see what would happen next. It was like watching the nature channel. During long bouts of meditation my inner cheerleader came alive and I sometimes repeated the instructor’s words in cute little chants using alliteration (“stay calm and quiet”, “be patient and persistent”). The first time I heard the instructor doing some chanting, which faded out into a long croaking noise, I thought he was slowly dying and my eyes shot open to see if anyone else found it funny. Free time also consisted of watching the very active frogs in the pond and pacing in the front yard.  Overall I wasn’t bored, and maybe twice the whole week I found myself thinking that a book or some music would be nice. It was pretty interesting how much my mind wandered into the past and brought up memories of people and events I had completely forgotten. During some of the sittings where we tried not to move, I contemplated how athletes must have very balanced minds in order to deny the physical pain in their bodies. I also thought about Tiger Woods and how his Buddhism had or had not helped him out in life.

After 9 days living the life of a monastic, it was a relief to be able to talk again, and to have a slightly more relaxed schedule. It was a surreal feeling, and we all felt a bit uneasy to TALK (better have something good to say after all this time!). Here was my first opportunity to see if the silent personalities I had “gotten to know” all week matched up with what the other meditators had to say. I was relieved to hear what people really thought of the course, whether critical or praising. One girl even said the course made her realize her life was already really good and she would never meditate again. I got an earful when one Serbian girl let loose on me explaining why she didn’t like America (though she assured me it wasn’t directed at me). It was a weird day, and the laid back vibe made it hard to concentrate. During our last meditation of the day someone snorted and the room almost went crazy with laughter until the teacher had to speak up in order to quiet us down.

Several people mentioned that they were impressed it was my first time, because of how disciplined I seemed. I generally sat in the meditation hall during individual sessions vs. in my bed, and never skipped the early morning session. I didn’t really know it was optional, but decided if I was there to try out the technique I might as well take advantage of the time. Plus, meditating on my bottom bunk bed didn’t appeal to me. I guess my true “hardcore” nature came through even in the silence?! It was pretty funny to contrast my approach with Joe’s dropout experience!

Before we went, Joe predicted the course would be full of depressed people, while I figured it would be a similar crowd to yoga class. In fact it was an interesting mix of people from many countries (about half Serb, half not), mostly older (maybe 5 of 20 women under 30, most of the rest over 40). There were also a few famous people in our presence: one washed up celebrity singer lady, a finalist from the Eurovision Song Contest, and the owner of a Serbian organic food store chain. In addition we had 2 professors (demography, geology), 4 homeopaths, a physician, an artist, and one advertising exec.

While most of the course is actual meditation practice, there are evening instruction sessions which at times engaged me with the sound logic presented, and at other times had me rolling my eyes. 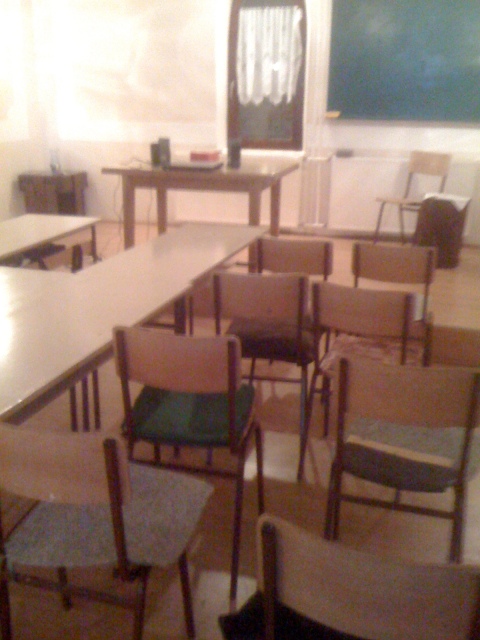 Classroom where we gathered around the laptop in the evenings

Now I know I can go for 10 days without most everything. I can sit for one hour without moving. Lack of sleep, no movement, no stimulation, no food? Sure, bring it on. Now whether all of that was healthy…

Perhaps I’m brainwashed now, but I really enjoyed the course. Maybe the course was life changing. Most likely not, because I believe lasting change happens gradually. I did hear a coherent explanation of concepts that I have previously thought and heard. In the 10 days since my 10 days, I have meditated twice and intend to try to incorporate it regularly (perhaps weekly; not the twice daily as recommended!). I have been getting by on less sleep, and generally feel less stressed, and notice my thoughts more.

I would not try to convince anyone else to go – it was definitely hard, and you would only benefit if you are interested on your own. Taking 10+ days while working and leading a “normal” life would be a huge sacrifice.

Although Joe left after the second day, he still felt like he benefitted by clearing his mind enough to start having really vivid memories, when he’s usually quite forgetful. He also felt generally calmer and had kind of a bubbly happy/friendly feel.

We both agree that meditation as a concept seems like a positive thing for anyone for the inner reflection and rest of the mind. Plus, it was a pretty memorable way to spend my last 10 days as a 27 year old!

§ 3 Responses to 10 Days of Silent Meditation

You are currently reading 10 Days of Silent Meditation at 82 Liters.