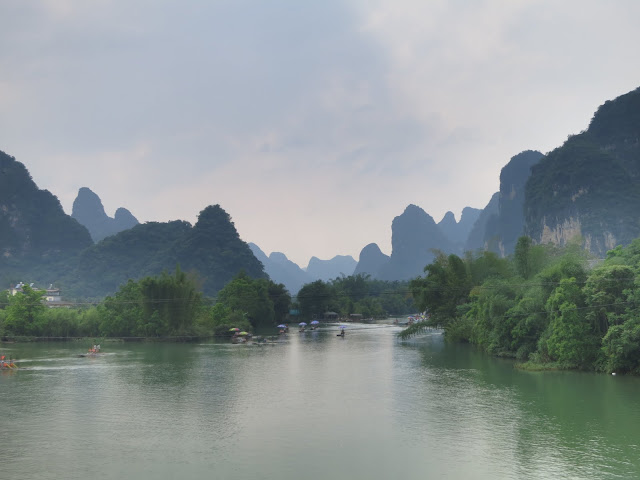 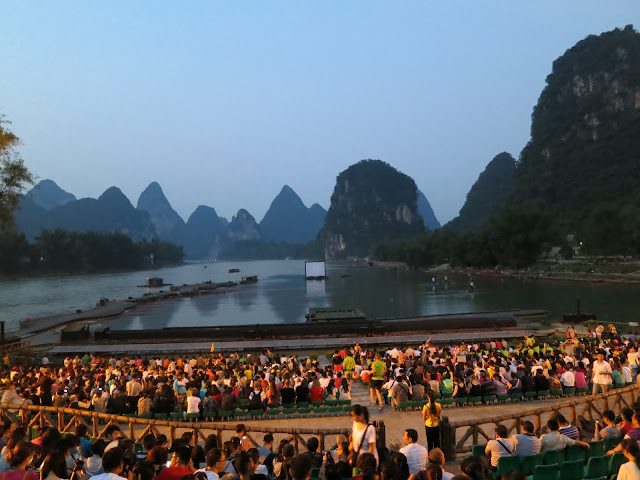 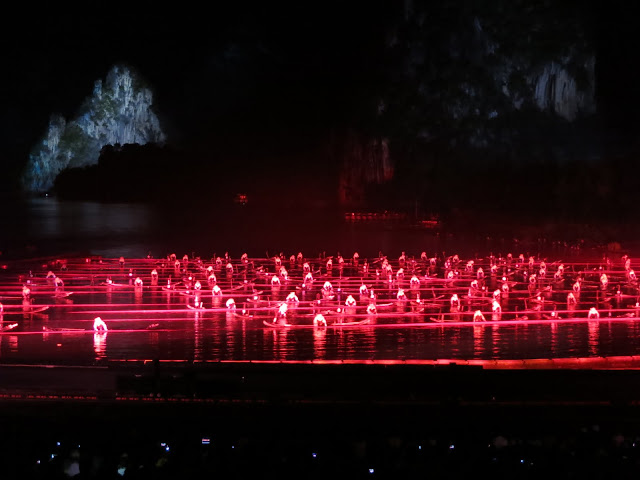 While we stayed busy and amused in Yangshuo, it wasn’t a complete paradise. We experienced intense humidity, scar-inducing mosquitoes, and thunderstorms. The electricity from the lightning was thrilling to watch from our open-air hostel balcony across the open fields surrounding us. 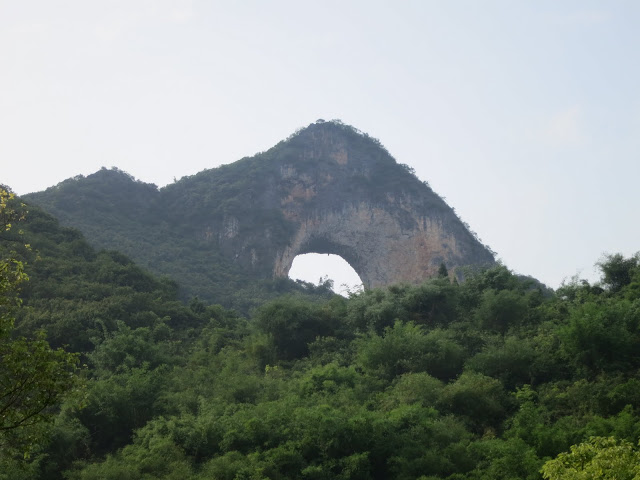 With a respite from the storm, we endeavored to hike Moon Hill (pictured above) despite the heavy, humid, air. We avoided the ticket fee by paying one of the local women who waits outside advertising the “local” entrance for much cheaper. We rationalized that at least the money went directly to local people, as opposed to other steep tickets we’ve bought at national sites where more than 70% is extracted by the national government, leaving locals with almost nothing to show for their exploitation. Even though it was only about 20 minutes of uphill exertion, we struggled. We heeded the advice of our hostel by taking the recommended path just beyond the “No Entry” sign and were rewarded with outstanding views. 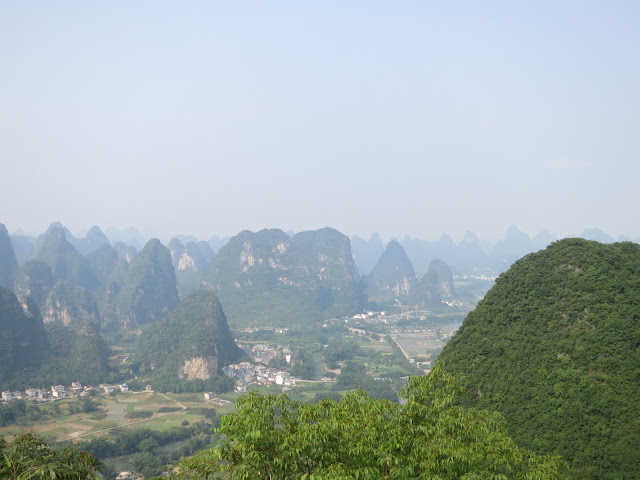 Afterwards we cooled off with a refreshing bath in the mud caves, and on the return trip we pulled our bikes over for melt-in-your-mouth strawberries freshly picked from the vines alongside the road.

Note: Generic photo, not us but you get the idea.

On our last day we took some time to educate ourselves in the Chinese arts of cooking and Tai Chi. 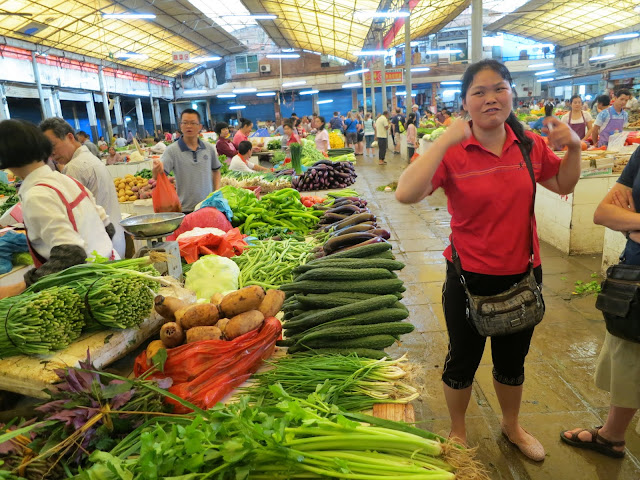 Cooking class included a trip to the market, where we were introduced to foreign varieties of vegetables like Chinese celery (more flavorful than ours), local strains of eggplant, and several unusual mushrooms. There was also a cringe-worthy butcher section which included dog and cat (don’t worry, no pics posted here).

We were instructed on cooking an eggplant dish (has become a staple comfort food of our Chinese cuisine!), Kung Pao chicken (Gong Bao Jiding), and the local beer-marinated fish. It was a good investment as learning about the mixing of flavors has allowed us to more fully enjoy the Chinese food we’ve been eating. 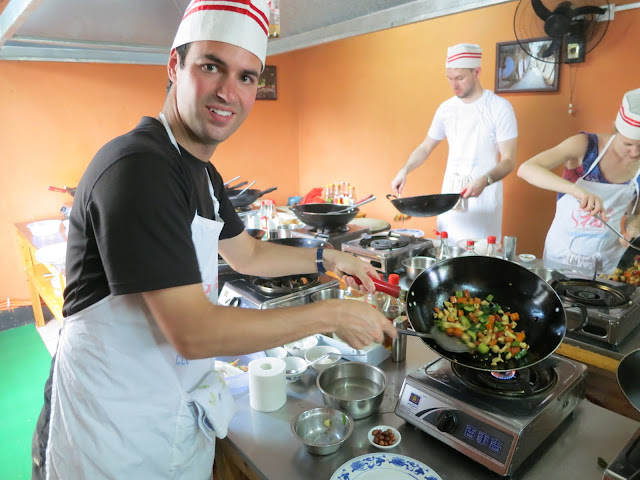 Tai Chi was a sport/art/practice that we continued to hear about, read about, and see in several towns. Maybe you have even seen practitioners in your local Chinatown or park. We took a 1.5 hour class with Master Wang himself, hoping to have someone with some English explain the basic components to us. When he wasn’t dousing us with holy mosquito repellant, he taught us the moves which were reminiscent of a dance routine or a moving meditation. Unfortunately the class involved less theory than we hoped and more memorization, but the private lesson was still eye opening for us. 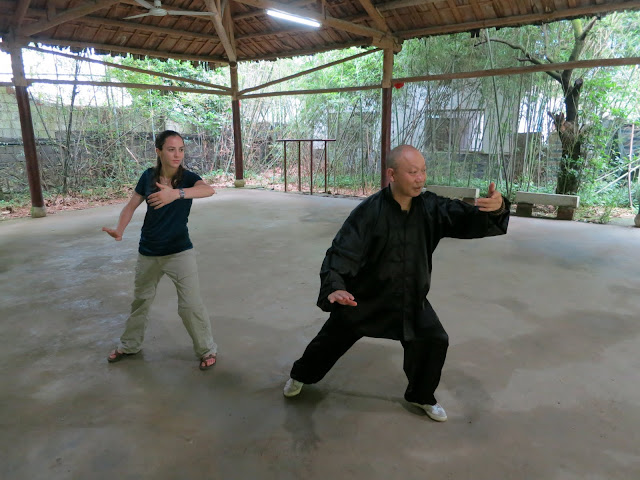 Yangshuo felt so different for us because we were able to let our guard down, embrace our inner tourist, and relax. We made some traveler friends on the overnight train into Yangshuo, and exchanged interesting travel stories with those in our cooking class. Even strolling touristy West Street was entertaining for a bit and a nice change of pace to feel catered to. We may have been lazier in not having to work so hard for our entertainment as in other places, but it also allowed us to be very active, and for us it was a vacation within a vacation.

See the rest of the photos from our mini-vacation in Yangshuo here.

You are currently reading Action-packed Yangshuo at 82 Liters.