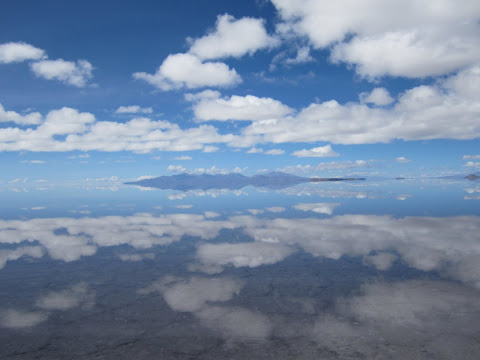 In 5 months of travel, we’ve seen our fair share of breathtaking scenery. Mountains, volcanoes, beaches, forests, waterfalls, extravagant churches, ancient ruins, argentine women, and more. But one sight triumphs over them all: the salt flats in Bolivia. 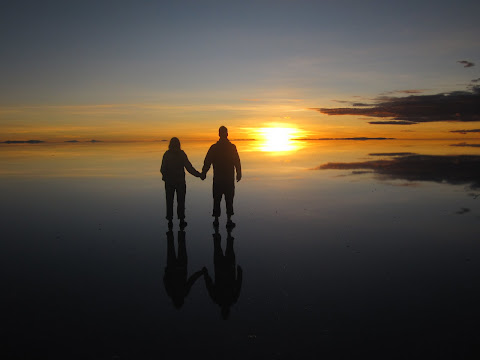 Salt flats are ancient lakes which have been covered by a few meter thick crust of hardened salt. With an area over 4,000 square miles, the salt flat in Uyuni, Bolivia is the largest in the world. There are no animals, no vegetation – just a huge expanse of flat, white salt. It’s size and flatness makes it an ideal location for calibrating the altimeters of satellites when observed from space. 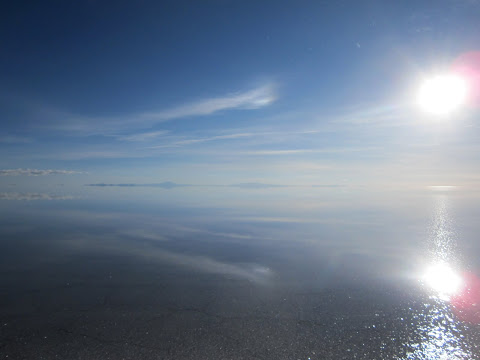 The timing of our salt flat visit was particularly lucky because it had rained continuously for several days prior. The rain covered the entire flat with a perfectly uniform 1-inch layer of water, which turned the ground into an unending mirror flawlessly reflecting the sky. We could barely distinguish where the ground ended and the sky began, creating the appearance that we were driving into the clouds. The mountains far off on the horizon looked like floating islands. The pictures speak for themselves. 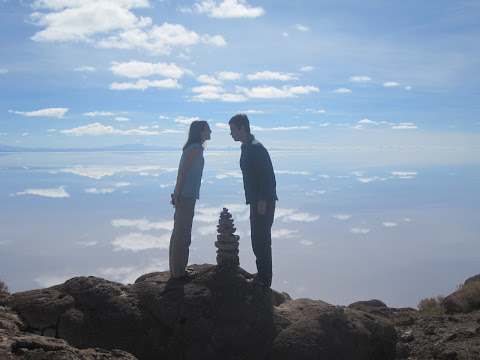 Seeing the flats were actually just the final day of a 4-day tour spanning a few hundred miles in a jeep. The first 3 days were less exciting than the flats themselves but still interesting. Highlights include:

– With no towns and only small outposts along the way, we slept in some interesting places. The first two nights our beds were made of cement slabs topped with a mattress and about 5 blankets to help with the below-freezing temperatures and lack of any heating. I still slept with 4 layers of clothes. No electricity of course but there were toilet bowls which you could flush by filling a bucket with water and then dumping.  The third night was in a hotel made completely of salt.  The walls were salt cinderblocks, the tables, chairs, and beds were large salt slabs, and the ground was loose salt chunks. I licked the wall.

– Seeing a green lagoon, white lagoon, and red lagoon in the same day. The vast amounts of minerals in the ground have strange effects on water color.

– Smoldering hot bubbling water and the distinct smell of sulfur / rotten eggs at the geysers. It wasn’t like Yellowstone with guardrails everywhere — here you could walk right up to and in-between the geysers (try not to fall in!).

– Dirt roads combined with the aforementioned continuous rain meant muddy, slippery paths that twisted through the mountains.  Several times we fishtailed perilously close to the edge of the cliff and once our back-left wheel went over the edge, necessitating us to deboard while other drivers helped push our jeep back onto the road. 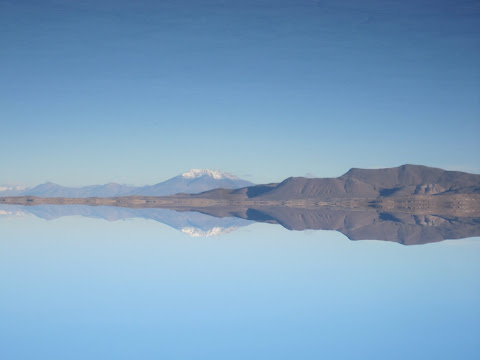 The salt flat tour produced our most surreal set of pictures thus far on our trip.  See the rest of the photo album here.

You are currently reading Salt Flats at 82 Liters.