A short unassuming paragraph in our guidebook about Shaxi (pronounced “shaw-shee”) piqued our interest with its descriptions of “a wonderfully sleepy place” that “lies in a time warp”. It was introduced as a stopover on the ancient Tea-Horse Roads that trading caravans passed on their way to India. Upon arrival we knew immediately this was the treasure we were hunting. It had everything we hoped for in a quaint old town: cobblestone streets, sufficient infrastructure to be comfortable but almost no crowds (yet), and of course a man taking his pig on a walk. 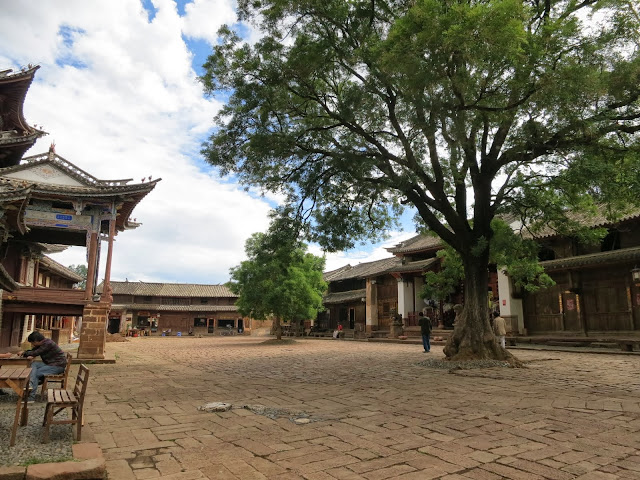 Every other traveler we met in Shaxi confessed to lingering in Shaxi for longer than planned due to its mesmerizing peaceful quality which contrasted so sharply to the rest of China. Our quirky, charming hostel was styled as a Horse Pen.  Locals and tourists alike spent evenings socializing and enjoying the picturesque scene in the town plaza. We met an Italian who relocated to Shaxi to open his one-room restaurant serving up all natural amazingly scrumptious homemade Italian food. 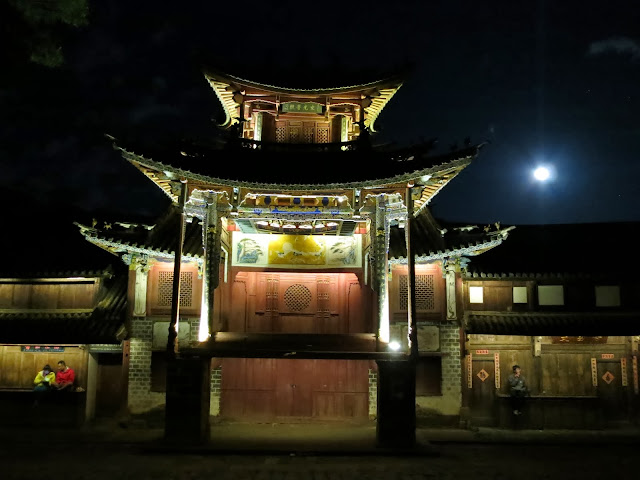 To top off the cute town, Italian food, and refreshing bike ride through agricultural plots we also got a taste of a Chinese cultural dining experience. There was no sign for the restaurant but luckily an Englishman we befriended showed us the way. There was no menu, no English spoken by the staff, but we were invited to the kitchen in order to point at vegetables, meats, and other ingredients. 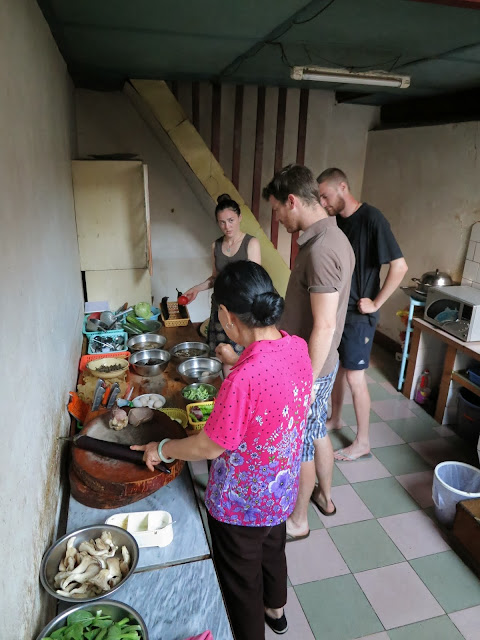 Ordering from the “interactive menu” (pointing at ingredients in the kitchen)

The food that emerged from the kitchen as a result of our hand signals was pretty tasty, but that wasn’t the last surprise. A troop of musicians and a singing/dancing ensemble consisted of local minority Bai people showed up to entertain us. The highlight of the group was the effervescent flute player who was the only one of the musicians who didn’t look like he’d bored of his instrument 10 years prior. The most…”culturally challenging” part for us to enjoy was the serenade by the “Beautiful Bai Girl” re-enacting a love scene in which a young woman pretends like she is killing a chicken to impress her lover. At least that’s what it sounded like to us. 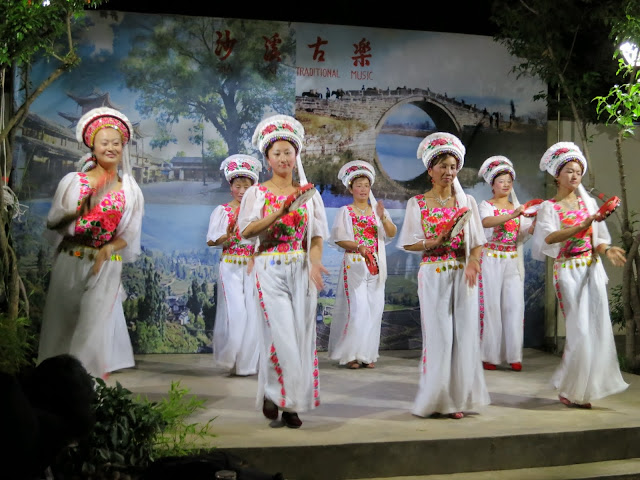 Since the rate of development in China so high, we fear that Shaxi is less than 10 years away from becoming another Lijiang. With a sense of urgency in our voices, it has become our #1 recommendation to other travelers we pass who have flexibility in their itinerary.

In contrast to Shaxi, upon which we stumbled almost on accident, hiking Tiger Leaping Gorge was an adventure which we had anticipated for weeks. Many people had told us about this great trek and although we feared we had too high of expectations, it totally held up. The name of the gorge is derived from the tiger which jumped across the river at its narrowest point of 80 feet in order to escape a hunter. Did I mention it’s a legend? The “low road” is paved and able to be traversed in buses, but the “high road” is only a footpath and the main section covers 14 miles, all within view of the perpetually snow-covered Jade Dragon Snow Mountain (elevation over 17,000 feet). Hiking the high road is popular enough there are many guest houses along the way, and there is a supporting ecosystem of transit and baggage storage. The path itself was not paved, a welcome change from most other hikes in China which consist of cement stairs and walkways (see Huangshan). This probably helps explain why almost no domestic tourists embark on hiking the high road, and in fact represented 0 in the group of 30 hikers getting off the bus with us that day. 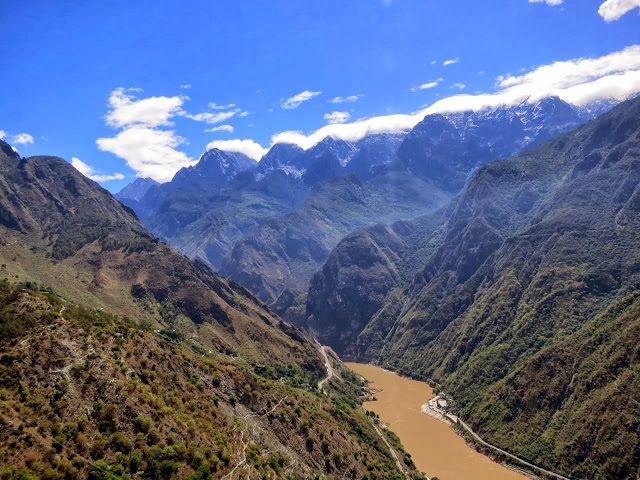 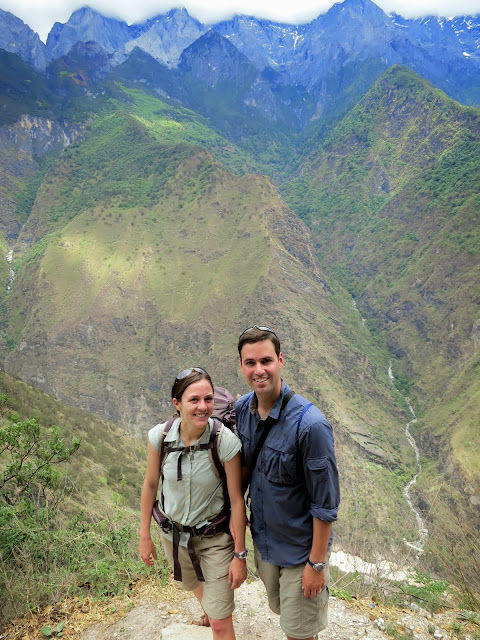 In addition to 2 straight days of jaw dropping views, the social aspect of the hike made it memorable for us. At least 7 countries were represented in the group that started with us, and we all spent the night at the so-called Halfway House along the route. There the window from our $15 room looked out directly over the gorge. 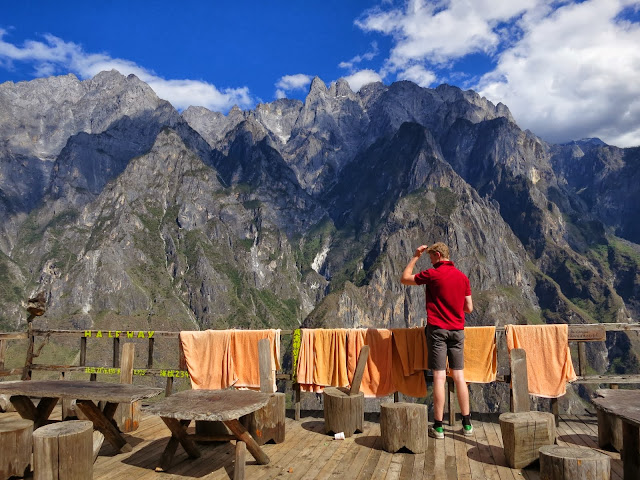 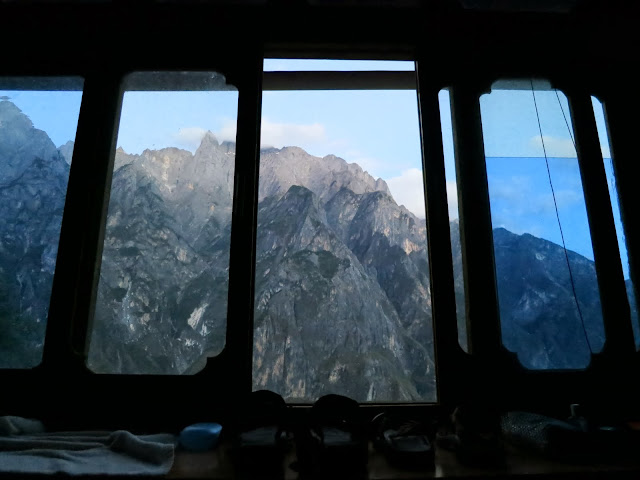 We paid about $15 for our room with this amazing view

On the second day, we reached the point where a 60 foot high metal ladder enabled us to climb down to the fabled Tiger Leaping Stone. We felt the spray from the powerful rapids rushing through the gorge which to date have not been successfully conquered by any rafters. I would tell you that the hike was our favorite in China, but I don’t want to set your expectations too high. 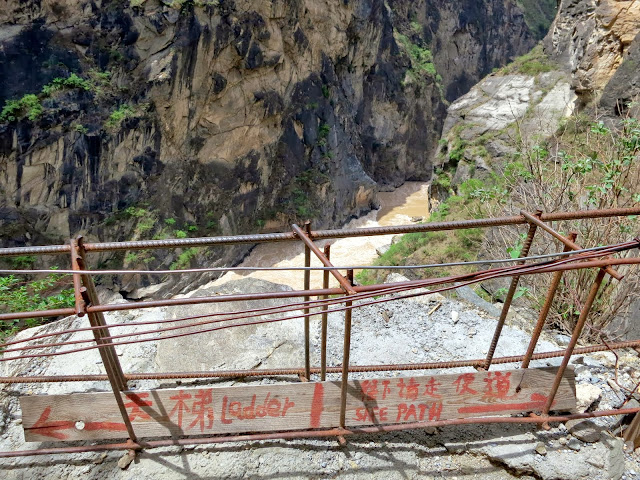 2 paths diverged…can you guess which we took? 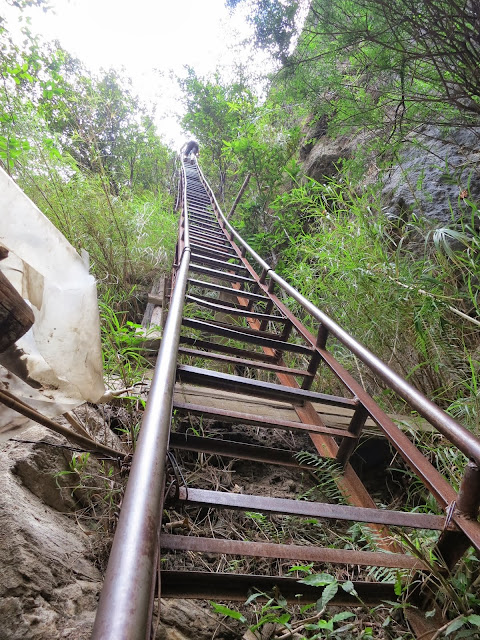 Inching our way down the 60 foot (~5 story high) ladder

Maybe the real reason we had such a positive experience in Yunnan was the opportunity to physically engage with a range of natural wonders, hiking and biking our way around the lakes and hills and farms. Maybe it was the fact that we got to sample several of the minority cultures – eating Naxi sandwiches, watching a Bai performance, meeting our Hui friend, and gazing at Tibetan prayer flags. Or perhaps it was due to lucking out with great weather and serendipitous encounters with friendly locals and interesting travelers. Regardless of whether it was coincidental or inherent to the province itself, Yunnan warrants a visit just for the chance to uncover new gems.

If you’re still not sold on taking your own vacation to Yunnan, browse our full photo album here.

§ 3 Responses to Gems of Yunnan

You are currently reading Gems of Yunnan at 82 Liters.